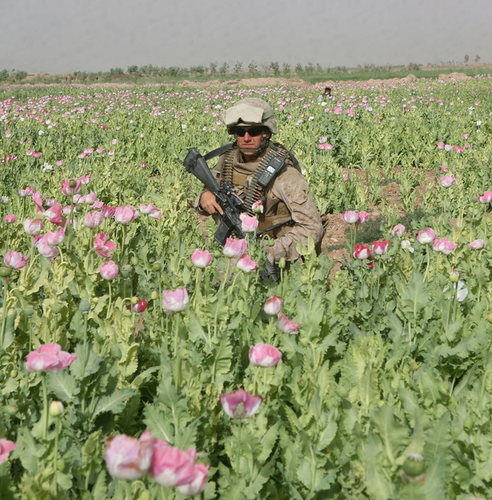 It’s time for DEA to blitz Afghanistan. DEA should commit additional manpower and resources to fill the vacuum created by the U.S. military’s drawdown. It may seem strange to call for an expanded role after the Trump administration’s recent peace treaty with the Taliban and the public’s growing weariness with America’s longest war, but DEA’s real value is not in interdicting narcotics shipments or blowing up clandestine labs in the mountains.

An evil cabal thrives in Afghanistan and spreads the scourge of heroin around the world. Roughly the size of Texas, Afghanistan produces approximately 80% of the global heroin supply and boasts the most acreage under poppy cultivation — the plant used to produce opium, morphine, and heroin. Afghanistan’s opiate sales surpass the value of its legal exports, and illicit drugs remain a significant percentage of the country’s GDP. Afghanistan has become the factory supplying the world’s heroin, but narcotics are not the biggest threat — that is terrorism.

Terrorism requires funding, and illicit drug trafficking is extremely profitable, making these criminal enterprises natural partners. According to the Drug Enforcement Administration, 37% of designated terrorist groups have some connection to drug trafficking. The United Nations Office of Drugs and Crime estimates $150 million the Taliban’s income is derived from the opiate trade. Afghanistan has become the axis of evil forces, where terrorists and traffickers build fortunes by turning powder into blood.

The Trump administration’s ill-advised peace treaty with the Taliban will fail, because negotiated peace is impossible with radical ideologues who believe they need to subjugate or murder anyone who disagrees with them. There is no substantial difference between ISIS and the Taliban, or with any other radical Islamic group which embraces violence. The only way to defeat terrorists is to imprison or kill them. As the U.S. disengages and withdraws troops from Afghanistan, the region will attract Islamists, traffickers, and other nefarious criminals like a black hole, and continue to be the frontline of the War on Terror.

DEA is the answer.

Both a federal law enforcement agency and an intelligence agency, DEA utilizes counterdrug strategies to investigate narco-terrorism. DEA’s proactive investigations rely on human source development, telephone intercepts, buy-busts, undercover meetings, and other aggressive police tactics. The agency’s primary enforcement teams are self-contained, ten-agent groups, which gather intelligence, collect evidence, and make arrests. Using the same agents for every aspect of an investigation, from identifying targets to executing search warrants, has proven highly effective. DEA’s strategy is to disrupt and dismantle criminal organizations by targeting key leadership and then using the criminal justice system to incarcerate them. This methodology is equally effective against terrorist groups, which structure themselves like transnational criminal syndicates.

DEA’s strategy has been successful. DEA arrests more offenders than the FBI, despite having approximately one-third as many agents, and a significant number of those arrests are the leadership of organized criminal enterprises. With 239 domestic offices and 91 foreign offices in 68 countries, DEA has worldwide reach. Unleashing DEA’s potential in Afghanistan will reduce the threat of Islamic extremism.

DEA is uniquely suited to deny funding to extremist groups by targeting the drug trafficking organizations that support them. DEA’s has the ability to develop vast informant networks, quickly turn intelligence into operations, and use the narco-terrorism law to incapacitate terrorists. Aggressive policing and judicial incarceration are efficient and effective ways to remove terrorists from the battlefield.

DEA achieved many victories, including record-setting drug seizures, the first narco-terrorism arrest, and conviction of the world’s most prolific heroin trafficker. DEA’s counterterrorism intelligence also saved many American, Coalition, and Afghan lives. The agency’s management trumpeted its Afghan cases to Congress, but during the 2010s, DEA’s focus swung to domestic operations and the size of the Kabul Country Office dwindled.

Only one percent of heroin consumed in the U.S. originates in Southwest Asia, but the number of American users is not the justification for increasing DEA’s presence. Without a strong American influence, evil will grow and spread across Southwest Asia, but DEA can mitigate the threat by identifying and eliminating narco-terrorists.

DEA has the expertise, but it needs to concentrate on terrorist leadership and drug kingpins, not on contraband seizures. Seizing drugs without dismantling the criminal organizations behind them is unproductive. Without widespread poppy eradication, it’s difficult to reduce volume of opiates produced in the world’s primary source country. Even if law enforcement actions inhibit the supply chain, traffickers raise prices to counter scarcity and continue to profit. Seizures don’t work but using DEA tactics to build criminal cases against narco-terrorists and then judicially prosecuting them will keep the enemy on their heels.

Increased DEA presence is not an endorsement of nation building. After almost twenty years and one trillion dollars sunk into Afghanistan, the Afghan police are still plagued by incompetence and corruption. DEA’s training and mentoring of the National Interdiction Unit and the Sensitive Investigations Unit has produced decent results, but the real success will come from amplifying DEA footprint and using aggressive tactics to dismantle transnational narco-terrorist groups.

Nor is ramping up DEA’s efforts a call for endless war. There are strong political and economic arguments for reducing the U.S. presence in Afghanistan, but every time the U.S. withdraws from an unstable country or region, bad things happen. Law enforcement agencies serve a different role than the military, but a vital one, and as U.S. soldiers depart, DEA needs to enhance its numbers.

Now is a critical time for DEA to reengage in Afghanistan. As the military departs and the country descends into lawlessness, DEA’s impressive human intelligence networks will thrive. When the U.S. is eventually forced to return to Afghanistan to eliminate the next threat, DEA’s continual presence will make our fighting forces more effective. Afghanistan is a hotbed of Islamic radicalism, and DEA needs to step up and fight.

Jeffrey James Higgins is a retired DEA supervisory special agent and an expert in narco-terrorism. He made the first narco-terrorism arrest and convicted the world’s most prolific heroin trafficker.