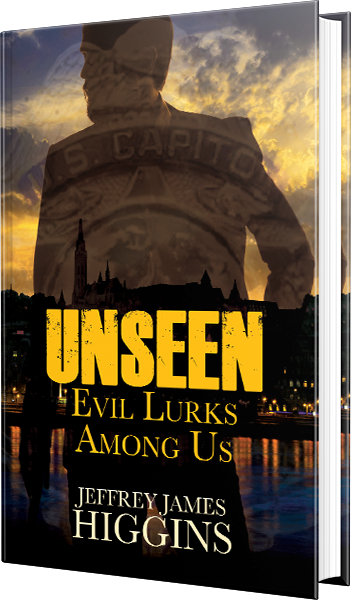 Unseen: Evil Lurks Among Us

Rookie Homicide Detective Malachi Wolf investigates a string of murders in Washington, DC and uncovers both a vigilante killer and a terrorist conspiracy—turning himself into a target. It’s Dexter meets Homeland. After his father’s murder, Malachi abandoned his economics doctorate to become a police officer and protect the innocent. Now, he must solve his first homicide to prove himself worthy of the badge. The body count grows as Malachi hunts a brutal assassin and unearths a sinister scheme that threatens the country. The former academic seeking justice and a vigilante set on revenge travel on a collision course—two men fighting evil by different means. Can Malachi stop the murders and expose the plot before the streets run with blood?

Evil was everywhere. It arrived with a smile, an extended hand, a sultry look. It came masked in beauty, cloaked in temptation. The more seductive the package, the more dangerous what lay hidden within. Evil was everywhere—deadly, unseen.

Austin had seen much violence and death during two decades spent hunting the devil, and he recognized darkness when he saw it. He understood the zealotry, the predation. An image of Vanessa flashed in his mind and a lump formed in his throat.

He raised an Amstel Light to his lips as the murmur of patrons filled the dusky Ritz Carlton bar in Georgetown, a wealthy neighborhood in Northwest Washington, DC. He took a long swig and used his peripheral vision to observe Sam Baker at the next table, careful not to look directly at him. At six-three and two hundred pounds, Austin had difficulty remaining inconspicuous—even more so after losing all his hair to alopecia—but appearing to belong was as important as his surveillance technique. Attitude meant everything.

Austin had been watching Baker for weeks, and he knew the man’s every gesture, until he could almost read his thoughts. Baker smiled, with eyes soft and welcoming, putting on the charismatic mask he wore when speaking with narcissists, parasites, and manipulators. Baker nodded and leaned forward in his red-leather chair, maintaining eye contact with the man opposite him.

“A sophisticated crime thriller that simmers with menace, passion and heart.”
—Best Thrillers

“Jam packed full of adventure; it keeps the readers guessing right until the end!…Unseen, Evil Lurks Among Us is a fast paced and enthralling novel.”
—Literary Titan

“Quite simply, this is a brilliant political thriller.”
—Artisan Book Reviews

“Unseen, Evil Lurks Among Us is a literary masterpiece. It is chock full of suspense, romance, and drama, with interesting character development. This is the ultimate page turner. I could not put it down.”
—Sarah N. Stern, founder/president, The Endowment for Middle East Truth

“Unseen combines an insider’s knowledge of Washington with fast action, satisfying romance, and a great big dollop of information about the Muslim Brotherhood. The result is as instructive as it is compelling.”
—Dr. Daniel Pipes, President, Middle East Forum