What does the first-ever terrorism charge against MS-13 member really mean?

Last week, the U.S. Department of Justice (DOJ) announced its very first terrorist charge against a member of the notorious Mara Salvatrucha gang, better known as MS-13. After unsealing the indictment in Virginia against Melgar Diaz, Attorney General William Barr depicted him as the individual who “would green light assassinations” at the gang’s behest in the United States.

And analysts anticipate that the move will have a significant impact on America’s ability to go after other gang members.

“The terrorism approach will open up and afford greater intelligence and investigative tools. Utilization of Patriot Act type laws and regulations will afford a more comprehensive U.S..S. and international approach to disruption and dismantlement of the organized crime aspects to each gang,” Robert Clark, a former FBI gang specialist, told Fox News. “The terrorism laws and applications will afford greater intelligence gathering and investigative capacity as well as unilateral prosecution abilities.” 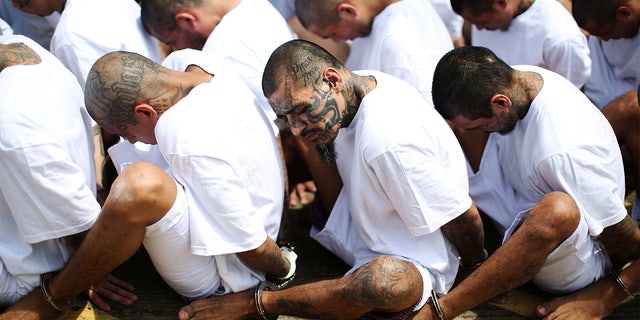 Mara Salvatrucha (MS-13) gang members wait to be escorted upon their arrival at the maximum-security jail in Zacatecoluca, El Salvador, June 22, 2017. (Reuters)

Diaz himself moved to Virginia from El Salvador in 2003, and quickly joined the GLS – a clique of MS-13. A decade later, according to court documents, he was deported to his homeland but returned illegally six months later. In 2016, he was once again deported to El Salvador, where he has since resided and pulled strings and collected finances for the gang’s operatives – referred to as cliques – across at least 13 states and Washington D.C. in the United States. He is currently in custody in his home country, charged with conspiracy to commit murder charges and drug trafficking.

WHAT IS BEHIND THE VIOLENT SHOOTINGS IN CHICAGO?

Furthermore, prosecutors are seeking the death penalty for another MS-13 leader – Alexi Saenz – in Long Island, New York. He was charged in seven slayings, including the murders of two teenagers. Grand juries in Nevada and New York also announced last week that new charges had been slapped on almost two dozen MS-13 members for a variety of violations, including murder, kidnapping, drug dealing and racketeering.

The takedown of MS-13 has been a vocal goal of President Trump, dating back to his 2016 campaign. He upped the ante in a press conference last week, telling reporters that his administration believes “monsters who murder children should be put to death,” and vowing that they would “not rest before bringing every member of the gang to justice.” The recent crackdown on the infamous Central American gang is credited to the Department of Homeland Security and the DOJ’s Joint Task Force Vulcan, an initiative launched last August with the goal of “disrupting, dismantling, and ultimately, destroying MS-13.”

But there are still many challenges ahead.

“Building federal murder conspiracy cases against transnational organized criminal organizations usually takes years. Finding witnesses to testify against MS-13 is particularly difficult because of their savagery,” explained James Jeffrey Higgins, a retired Supervisory Special Agent with the DEA and author of “The Narco-Terrorist.” “If terrorism-related charges were included in the indictment, it would give the Feds authority to charge violent crimes as well as additional sentencing guidelines.”

Members of the El Salvadorian community in the U.S. are often victims of the gang, Higgins underscored, and “cooperating with authorities can put targets on witnesses and endanger members of their families who live in El Salvador, a country which has been destabilized by MS-13.”

Despite the new push, the infamous street gang has long been on the radar of U.S. law enforcement. The Obama administration sanctioned MS-13, with the Treasury Department designating it “a transnational criminal organization,” the first-ever for a street gang.

“The evolving complex threats posed by transnational crime groups like MS-13 must face the power of the United States,” asserted Derek Maltz, a former special agent in charge of the Drug Enforcement Administration (DEA) Special Operations Division in New York. “Terrorist investigations, like this MS-13 case, will provide enhanced resources and should also, in reality, get the proper focus on the threats by the agencies. DOJ will use the expertise in the different agencies to put forth a way more effective attack on MS-13. These are acts of terrorism, and MS-13 should be dealt with accordingly.”

The gang was established in the impoverished, marginalized neighborhoods of Los Angeles, California, in the 1980s by those who fled the civil war wracking El Salvador. 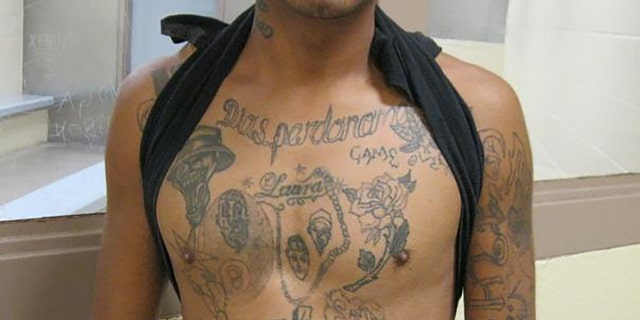 Gonzalo Garcia-Gonzales, a 26-year-old Mexican national and documented MS-13 member, was arrested as he illegally entered the U.S., the CBP said. (U.S. Customs and Border Protection)

It escalated into one of the most savage criminal enterprises on the planet as it spread to almost every state via an array of “cliques” or cells. Each clique is described as having its own echelons and rank status. InSight Crime, which specializes in investigating and analyzing organized crime, defines an MS-13 “Homeboy” as a fully initiated member who has completed a “jumping-in” ceremony. Such a commemoration involves a beating test, “where the prospective MS-13 member must survive a group of existing gang members beating him for 13 seconds.” Once jumped in, according to InSight Crime, “MS-13 members are expected to participate in the gang’s criminal activities, and certain “homeboys” also operate as “Palabreros” or “shot callers,” making the ultimate decisions affecting the clique.”

Meanwhile, leaders of these cliques – designated to specific areas – are referred to as “corredores,” meaning “those who have the word.” “Primera palabra” is typically the first-in-command of a clique, and “segunda palabra,” is the second-in-line. Some of the very top and trusted top-brass are issued authority to manage cliques from a distance.

In the 1990s, as the gang’s bloody reign grew, more potent authorities began expelling members from the United States back to Central America. However, a 2008 Congressional Research Service inquiry into the group found that it only continued to grow stronger.

“They have become even more organized and since the violence in El Salvador and other countries such as Guatemala and Honduras as well as other regions, as well as the continuing leadership inside the prisons and protected because they are among their peers, their abilities to organize have become more proficient,” Clark explained. “Also, with continuing deportation, they have received freshly trained and experienced soldiers, along with the continuing  advanced use of social media to recruit and communicate has likened to any terrorist network.”

MS-13 is already a terror group designated by El Salvador, yet not the U.S. However, 18 U.S. Code § 2331 – which covers a broad scope of “international terrorism” – does give U.S. authorities some latitude in the application.

“The law gives the U.S. extraterritorial jurisdiction, and at the fullest application I can see new coordination between DOJ and elements within the intelligence community and DOD to target and prosecute MS-13 members abroad, which will help law enforcement more easily interdict them in the U.S..,” observed Andrew Lewis, a former Defense Department staffer and the president of a private intelligence firm, the Ulysses Group.

And they are reported to be growing not only in scope but in tactics and logistical capabilities. Police in Honduras said last month that MS-13 had “wired several Honduran neighborhoods with surveillance cameras,” which were connected to a router and thus enabled members to view activity streams on their phones, computers, and other devices.

“Though this is not the first time authorities have discovered a video system controlled by the MS13, its routine use in several poor neighborhoods in San Pedro Sula is striking,” InSight Crime surmised. “For the gang to have placed cameras in marginal neighborhoods shows that the system enhanced gang surveillance in some way beyond the usual modus operandi of positioning young members as watchmen.” 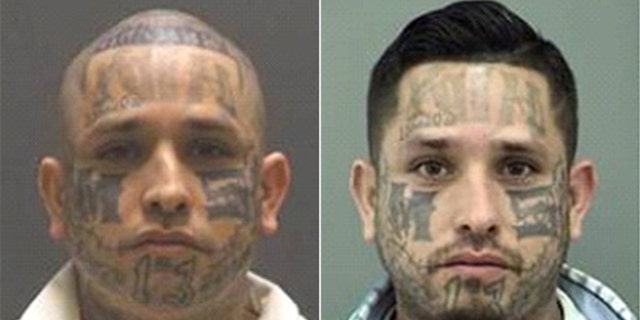 Rodrigo Flores, 34, has been added to the Texas 10 Most Wanted Fugitives list and is affiliated with the MS-13 gang, according to officials. (Texas Department of Public Safety)

While membership figures vary, the U.S. Southern Command has estimated that there are some 70,000 members in the Northern Triangle alone. Most of the recruitment efforts target young teens, with some born in the U.S. or second-generation members.

Yet David Pyrooz, associate professor of sociology at the University of Colorado Boulder contended that while MS-13 “has always been an outlier when it comes to gang violence,” given their extensive use of “machetes, dismemberment, targeting, and other extremes (which has) made them a trophy in criminal justice,” they are “a drop in the bucket of U.S..S. gang violence.”

“I don’t mean to discount their violence. But they are responsible for a small fraction, no more than 2 percent, of gang-related homicides, and an even smaller fraction of all homicides, in the United States,” he added. “The problem with gang crackdowns is that they are temporary solutions to much bigger fundamental issues. If anything, copycat gangs that take on MS-13 symbology will emerge because the gang is perceived as the biggest and baddest, not unlike how street gangs adopt the names of organized crime and terrorist groups.”

Hollie McKay has a been a Fox News Digital staff reporter since 2007. She has extensively reported from war zones including Iraq, Syria, Yemen, Afghanistan, Pakistan, Burma, and Latin America investigates global conflicts, war crimes and terrorism around the world. Follow her on Twitter.
Sign up for Jeffrey's Newsletter: Subscribe