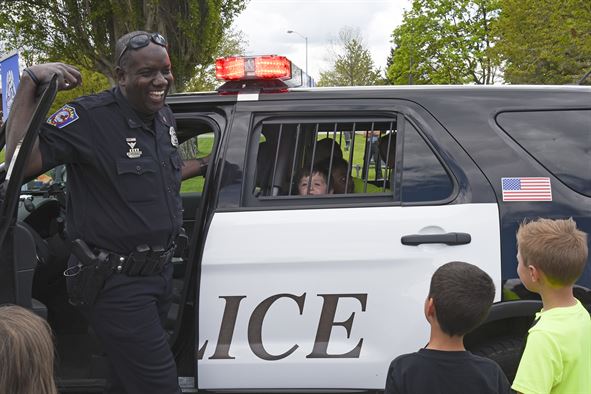 Stories about racism are dominating the news and the false narrative that there is an epidemic of racist police officers killing unarmed black men continues to be widely believed, despite overwhelming evidence to the contrary. It was a hot political issue during the last presidential campaign and it became one of the most reported stories in 2016. The value of propagating this falsehood has dwindled since the election, but it still lurks below the surface, waiting to be resurrected as a political weapon.

It is time to end this myth.

A quick statistical analysis of reported police shootings in 2015 and 2016 clearly shows that the unlawful use of deadly force by police against blacks is statistically insignificant. The number of people killed by insects in the United States each year is higher than the number of unarmed blacks shot and killed by police officers. Unfortunately the proliferation of this political lie and the vilification of police has resulted in the assassination of police officers, inflamed racial tensions, and a surge of violence in black communities.

Obviously, there is racism in the United States, just like there is in every other country in the world. Some police officers do commit individual acts of racism and there may even be residual, systemically racist policies in some police departments. There are also instances when deadly force is improperly used by some police officers, but racism cannot be assumed without evidence. While individual acts of racism and excessive use of deadly force by police do exist, the characterization of these incidents as systemic problems is absurd.

The Washington Post’s police shootings database has more comprehensive statistics than the numbers reported by the FBI. According to the 2016 database, police used deadly force to kill 963 people. Of those killed, 465 were white, 233 were black, 160 were Hispanic, 42 were other races, and the race of 63 victims was unknown. Over 95 percent of those killed were men.

Out of the 233 blacks killed by police, 175 possessed a weapon, 13 had a toy weapon, and 15 were in vehicles, which can be used as weapons. Only 17 of the black men killed by police were confirmed to be unarmed, according to the database. Being unarmed does not make a shooting unjustified, but these are usually the most controversial shootings.

The 2016 statistics on police shootings were not radically different from the previous year, though the 2015 numbers were higher. In 2015, police shot and killed 991 people and there was an attack in progress in at least 730 of those cases. Blacks comprised 258 out of the people killed and 38 of them were confirmed to be unarmed.

Now, put these numbers into context. According to the US Department of Justice’s Bureau of Justice Statistics, there were 750,340 sworn law enforcement officers in the United States, as of 2012. The 17 unarmed black men killed by police in 2016 give us a ratio of 44,137 officers for every one unarmed black person shot by police.

In 2015, according to the FBI’s Uniform Crime Reporting, there were an estimated 10,797,088 arrests made by police in the United States. Assuming the 2016 numbers are similar, that’s one shooting of an unarmed black person out of every 635,122 arrests.

In 2011, according to a survey by the FBI’s Bureau of Justice Statistics, approximately 22.8% of the population had one or more face-to-face contacts with police. As of July 2016, there were approximately 323,148,587 people in the United States, of which approximately 13.3 percent, or 42,978,762, were black. If the rate of black interactions with the police is at least equal to the population average, approximately 9,799,157 blacks had contact with police. That’s one unarmed black killed by police out of every 576,421 contacts between police and blacks.

The 2015 and 2016 statistics on police shootings show a very small number of unarmed blacks shot and killed by police compared to the size of the population, the number of police, the number of arrests, and the amount of contacts between the public and the police. Despite what is portrayed in the media and repeated by politicians, there is no epidemic.

The myth that police are systemically murdering blacks because of racism is often supported by statistics that show police shoot and kill a higher percentage of unarmed blacks compared to other races. In 2016, approximately 48 percent of people shot by police were white and 24 percent were black. Since blacks make up only 13.3 percent of the population, this number is disproportionately high.

Politicians have trumpeted these statistics as proof of racism. In a speech by President Obama about the 2016 police shootings of Alton Sterling and Philando Castile, the President said, “These are not isolated incidents. They’re symptomatic of a broader set of racial disparities that exist in our criminal justice system.” The President continued, saying, “Last year African Americans were shot by police at twice the rate of whites.”

Comparing race and shooting statistics implies that police are shooting people based on race, but disparate outcomes alone don’t provide proof of racism and mistaking correlation for causation is flawed methodology. Confounding variables need to be identified and controlled through regression analysis. For example, there is a strong correlation between increased ice cream sales and higher homicide rates, but that doesn’t mean one causes the other. Other variables, like hot summer months, must be taken into account.

Demographics, culture, poverty, urban residency, and behavior are just some of the variables, which may affect the rate that blacks are shot by police. It’s important to note that race does not predetermine specific behavior, but differences in exhibited behavior by populations can impact the frequency of police shootings.

There are numerous other variables that may contribute to causation. Young men commit a disproportionate number of serious crimes and in 2013, the median age of black men was 31, compared to 41 for whites. Blacks under the age of 18 accounted for 33.9 percent of all arrests in 2015. Per capita crime rates are much higher in urban areas and some of the most violent cities in the country have black populations that exceed their percentage of the general population. More police also work in high-crime areas, so if the black population is larger there, the chance of interaction with police is increased. Poverty is also correlated with criminal behavior and the poverty rate among blacks is almost twice the national average.

These are just some variables that may affect the interactions between police and black suspects and explain some of the variation in shooting rates. What is missing is any evidence that racism causes the higher percentage shooting deaths of unarmed blacks. A direct refutation of the racism theory is a study by Harvard Professor Rolan Fryer, Jr., who found no significant racial differences in police shootings under similar circumstances.

All police shootings need to be thoroughly and transparently investigated, because some police shootings are unjustified and a small percentage of police officers shouldn’t be allowed to wear a badge. However, while all deaths are serious, the statistics clearly show that police are not murdering unarmed blacks in large numbers. Furthermore, racism is not a proven motivation for disproportionate outcomes.

This myth has to end.