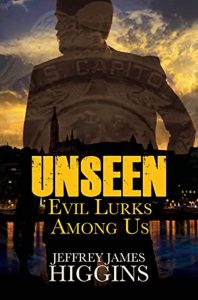 Unseen, Evil Lurks Among Us, is a gripping thriller written by Jeffery James Higgins. The novel has a strong line up of characters, an interesting plot and enough action to keep the reader glued to the book.

There are two main characters in this story, Malachi and Austin; the traditional hero and villain. Rookie Homicide Detective Malachi is a former economics academic, turned detective after the death of his father in the Boston Marathon bombing. Austin is a man hell-bent on revenge after he lost his girlfriend at the hands of an Islamist infiltrator. An ex-solider, he plots his revenge whilst keeping up his appearance as an innocent bachelor who lives with his beloved dog Sophie. These are complex characters, as both show that they have both good characteristics and traits, as well as more disturbing aspects to their personalities. At times both fight their own inner demons. These two characters are well developed and are supported by a range of minor characters including a girlfriend, children, an ex-wife and friends and colleagues. Although they aren’t as well developed, all the minor characters are an integral part of the story.

Unseen, Evil Lurks Among Us is set in present day Washington. Higgins draws the readers into the story by describing the setting in detail. Opening the story with a scene in a bar, the action moves quickly to the outdoors, where even the oppressive humidity is described. Numerous sounds, sights and smells are described throughout the novel, as the story unfolds across various parts of Washington.

This is a fast-paced thriller that follows the typical structure, but the story is told from two points of view (Malachi and Austin’s). It starts with an action packed first chapter, with numerous clues and red herrings. Jam packed full of adventure; it keeps the readers guessing right until the end!

Unseen, Evil Lurks Among Us is a fast paced and enthralling novel. The characters are well developed and interesting, and the storyline, while complex, is still easy to follow. But most importantly for this genre, the plot just keeps you guessing with many twists and turns along the way.