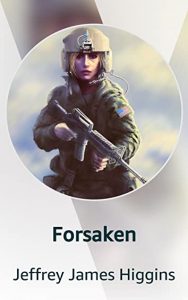 I published Forsaken, a serial story on Amazon’s new serial platform, Vella. It’s a military thriller with a strong female protagonist. The first eight episodes are live, and I’ll post two episodes per week until the series ends.

Presumed dead and abandoned in Afghanistan, Army Medic Samantha North must evade a ruthless Taliban commander and fight for her life. Samantha joined the Army to become a medic, but when the US military withdraws from Afghanistan, they list her as Killed in Action and leave her behind. Now, she must transform from healer to war fighter to evade capture and find her way home. Lost, hunted, and forgotten—can she survive?